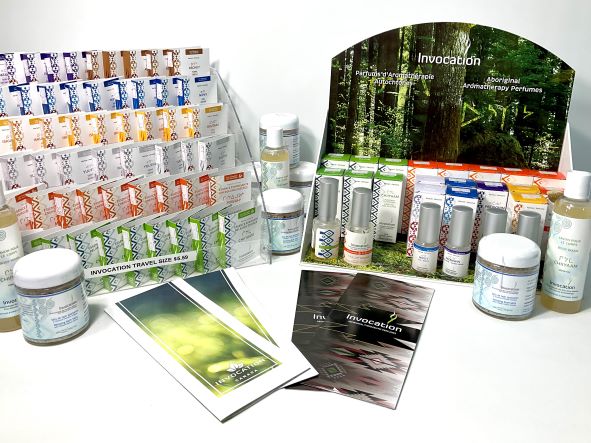 100% natural and developed with First Nations knowledge, Invocation products are made with high quality essential oils and plant extracts.

Our crafts people work with ecological consciousness and great care to guaranty our Native Essences are efficient.

Traditionally, burning sacred plants is used by all Native Americans to purify people and places. In 1996 Blue Eagle, a traditional shaman of Abenaki, Algonquin, Pawnee and French Canadian descent has difficulties working without the traditional smudging as is called the burning of sacred herbs, in the hospitals where he is called to look after Natives from the Far North.

Inspired to find a solution without smoke with essential oil, he travels to France to meet the great perfumer from Ville de Grasse, Michel Roudnitska.  Blue Eagle returns to Quebec and works for 2 years at the creation of Invocation’s first Native Essence, CHIIYAAM. This natural perfume consists of essential oil and extracts stemming from sixteen different plants. Amazed by the efficiency of this fragrance that purifies and harmonizes the electromagnetic fields, he wants to make it available to all.

The company Invocation is created in December 1999. Its name is a reference to one of the main functions of traditional smudging which is to call upon the Ancestors.

When CHIIYAAM becomes available, the positive response from the public is impressive as CHIIYAAM’S properties are amazing. Aware of the need for natural perfumes by a growing population that are hypersensitive to the chemical and synthetic ingredients in mainstream fragrances, Blue Eagle creates MIWAHu in 2011. Since then, several other natural and shamanic Native Essences are created and several others are in preparation.

Thus, Invocation has become the first perfumery in Canada has at heart to produce perfumes with components cultivated and harvested according to native philosophy. Following First Nations philosophy, this company considers its employees as the core of the company. It ensures, thanks to them, the great quality of its products by manufacturing, bottling, labeling and packaging each bottle by hand.